This month I am trying to take the BlogHer challenge to blog every day with the theme “hot”.

I grew up in a family that did not discuss politics. To this day, I don’t have any idea how my parents voted. They did not think it was any one’s business but their own.

When people talk about politics around me, I mostly listen. I am often astounded by the political rants that you find on Facebook. I do think that it is great to have an opinion and believe in your side of an issue. More power to you if you want to share that feeling. I do take exception to the personal attacks that seem to be so prevalent. The emotions seem to take the issue beyond where the focus should be. Too often, it seems that if you don’t agree then you are a racist or sexist or just plain stupid for not agreeing.

One of the current “hot” issues is gay marriage. In contrast to my nature, I will share with you my feeling on this issue.

I have never felt that anyone except the two people involved in a relationship can judge a relationship. Look at some the marriages that we have before us in the news. Quite frankly, I wonder why Hillary has stayed with Bill. But it is because it is a relationship between them and only them. They have worked it out somehow and it is none of my business how they did it.

If you thinking “God will get them” then let Him do it. We will all have to face Him and our sins. Gay people are first of all people. They are people for whom life is harder than it already is for the rest of us. Don’t add to the bias and prejudice they experience.

If you don’t want to marry gay couples in your church, then don’t.  You have the right to your feelings and beliefs. Don’t stop the civil institution of marriage because your religious institution doesn’t agree. You have your rights and they should have theirs. 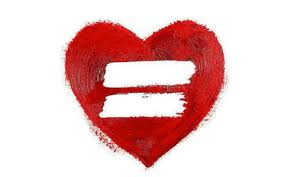 In a Utopian world, we would be free of all prejudice. I do not think this will ever happen but I think we should and can make some things equal. Try to extend to all people the decency that you would like extended to yourself.

So much for “hot” topics! I think I will move on to something like “hot” peppers or “hot” wheels next. This “hot” topic business if pretty hard for me.

Have a great weekend.

I love to read. I love to share my thoughts on books and hope to hear what you think also. Looking to see what books I read beyond those I write about? Check out my Goodreads!
View all posts by Carol Early Cooney →
This entry was posted in Writing and Photo Prompt Responses and tagged committed relationship, Hot topic, marriage equality. Bookmark the permalink.