I did something over the weekend that I dislike doing.

I went to a graduation. 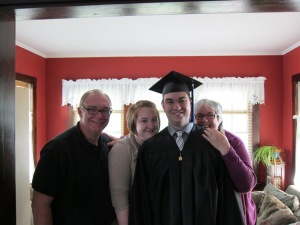 Really, I dislike going to graduations.  I am almost that parent who would pay their kids to skip graduation.  As a result, I have been to three in the past few years.  So much for doing things to please your mother!

There is just something about being in a big auditorium and having to sit there for hours.  I am not very good at sitting anywhere for hours.

On Saturday, we went to the graduation ceremony at University of Wisconsin – Whitewater.  There were approximately 1200 graduates.  They read 1200 names!  I will give them credit that it did move along pretty well.

Since there were so many graduates, we were told to get there when the doors opened so that we would get a seat.  We left home at 6 a.m. so that we were at 8:15 a.m. in line to get into the arena.  In retrospect, we did not have to be there that early.  But we did get our pick of seats.  Yes, we got to sit on our folding chairs that were zip tied together from 8:30 until the ceremony stared at 10.  Thank goodness my husband carries a little knife that could cut the zip ties.  We are a close family but not that close!

On each of the seats, there was a commencement program.  I did the same thing that each person in the place did when they opened the program.  I looked for my son’s name.  I found it fairly quickly.  To my surprise, there were two asterisks by his name.  I looked around the page to find out that that meant.  Being the most supportive parent ever, my thoughts were “awarded a degree but we have grave doubts about this one” or “getting out by the skin of his teeth”.  Nice, huh?  Let me explain a bit.  My son is wonderful.  He is a great guy.  He has taken his own path.  As I have often said, if there were two roads and one was marked “easy” and one marked “hard” he would be on that hard road as fast as possible.

When he was 13, we found out that he has a brain malformation. Doesn’t that sound awful? Well, it is not good but in the scope of things that can be bad, it is not bad.  We were very lucky.  The malformation was found before he had any problems and we never had to sit and wonder what was wrong.  We knew parents who had sick children who had to wonder and go through test after test.  We did not have to do that.  Between the years of 13 – 16, he had three neurosurgeries. In essence, his brain is too big for his skull.  This has led to many jokes in the family.  “He is so smart…”

During these years of surgeries, he didn’t miss any school.  We just kept trucking through.  He is very bright (yea, I know, every parent says that…).  He got into a university and off he went.  Only, it seems at the time he knew he shouldn’t be there.  He needed some time.  So he took that time while he was supposed to be in school.  At the end of the first year, we had decided that he needed to figure out a few things.  So he came home.  He worked, moved out of the house, and supported himself.  And drove me crazy because he was not going to school.

One day he came home and announced that he was too smart not to finish his degree.  FINALLY!  I was ready to throw a parade in his honor.

So, he started back.  At first going to an on-line school and finishing his Associates degree.  He then enrolled at University of Wisconsin – Whitewater and flashing forward, here we were at his graduation.

I am very proud of him.  It was not easy to go back to school after not going for several years.  It was not easy to give up a steady paycheck to be a poor student. But he did it.  He finished.  I know there were times that he was sure that time was standing still and he was never going to get to the finish line.

But at least he was inventive.  When he crossed the stage, he had on a braid.  It seems he borrowed it from a guy he knew two rows in front of him.

We drove home after the ceremony and he had some friends over to celebrate.  After much debate, we decided on the perfect inscription for the cake.

He not only has finished his degree but (and best of all…) he has a job!

I love that kid.

I love to read. I love to share my thoughts on books and hope to hear what you think also. Looking to see what books I read beyond those I write about? Check out my Goodreads!
View all posts by Carol Early Cooney →
This entry was posted in Miscellaneous Thoughts and tagged graduation, neurosurgery, University of Wisconsin - Whitewater. Bookmark the permalink.