The Dry by Jane Harper

Somehow, I had missed seeing The Dry on the bestseller lists during 2017.  When it was picked by my book club, I had never heard of it.  With all the books that I am dying to read, I hated to pull myself away to read this book.  But, since I like going to my library book club, I read the book. 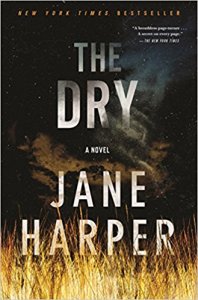 I was drawn in from the beginning.  The book takes place in the Australian town of Kiewarra, which is a few hours outside of Melbourne. It is farm country which is suffering from its second year of a drought.  And suffering is the word to describe it. The farmers don’t have the water to grow anything or give their animals. Money is tight all over the area. The town has lost most of its commercial district because no one has money to spend.

Aaron Falk grew up in this town. He and his father fled the town after Aaron was accused of the murder of Aaron’s friend Ellie Deacon. She was found drowned in the river with stones in her pockets. At the time of the murder, Aaron was given an alibi by his friend, Luke Hadler.  Aaron knew that he had not killed Ellie but he was alone fishing when she was killed and therefore did not have a useful alibi. Aaron did not know where Luke had been but Luke was insistent that Aaron use the alibi that Luke gave him.  Even with the alibi, there was a strong sentiment stirred by Ellie’s father and cousin that Aaron was her killer. Ellie’s father made Aaron and his father’s lives miserable until they packed up and left Kiewarra.

Twenty years have passed since Arron left Kiewarra. Aaron lives in Melbourne and is with the police.  He has risen through the ranks and now investigates financial crimes. Aaron is called back to Kiewarra because Luke, his wife, and son were found dead. It looks like Luke killed his wife and son and then killed himself.  Luke and his wife, Karen, had two children. Luke’s daughter, Charlotte, was found in her crib alive. Everything indicates that Luke snapped due to the draught and the resulting financial crisis.

Aaron was debating about going to the funeral. The town had not treated him well and he didn’t have any desire to go back.  He knew that feelings would still run hot against him. But then Luke’s father sends him a message that read  “Luke lied. You lied. Be at the funeral.”

Not knowing quite what to expect, Aaron meets with Luke’s parents after the funeral. Luke’s mother, Barb, asks Aaron to go through the financials. She thinks that someone killed Luke and his family. She feels sure that Luke borrowed money from an unscrupulous person and that person killed Luke and his family.  Gerry, Luke’s father, doesn’t believe that.  Both prevail on Aaron to look into the matter.  Because they were so much a part of his life when he lived in Kiewarra, he decides that he has to look at the financials. He goes to Luke’s farm and meets Sargent Raco. Sargent Raco feels there is something wrong with the murders. Not enough to call back the police who originally investigated the crime yet but it doesn’t add up in his mind.

Did Luke kill more than just his family? What were those odd marks in the back of Luke’s pick up? With all the animosity in town, will Aaron make it out of town alive?

I really liked the book.  I thought that it moved along at a good pace and you could visualize the scenes. No, I would not have guessed the ending.

I love to read. I love to share my thoughts on books and hope to hear what you think also. Looking to see what books I read beyond those I write about? Check out my Goodreads!
View all posts by Carol Early Cooney →
This entry was posted in Talking Books and tagged book review, Jane Harper, mystery, The Dry. Bookmark the permalink.