(Each week, my writing group, Wordsmith Studio, posts a word prompt to be used as inspiration for a poem, photo, or short story.  This week’s prompt is BENCH.) 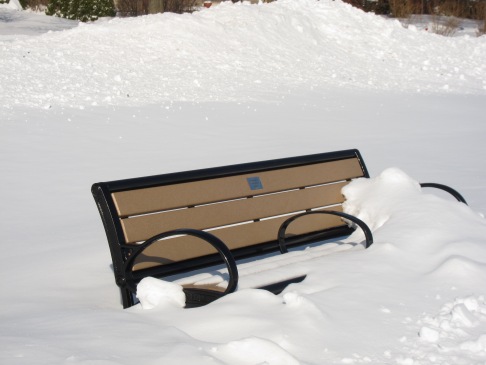 The Man on the Bench

She ran past the same bench every morning. She noticed one day that a man was sitting on the bench staring out at the lake. She didn’t know if he had been there before but once she noticed him, she saw him there every day.

She began to take an interest in him. After all she was doing her morning run and her mind was not occupied all the time. She didn’t have much time as she ran by but little things started to capture her attention. He sat looking out with his hands on his knees. He was dressed in a suit on work days and in jeans and a sweater on weekends.

She usually ran at the same time seven days a week. Weekday or weekend it didn’t matter she hit the trail at her self-appointed time. One morning she was delayed. She noticed that she had missed him that morning.

“He must have a set time also” she thought.

She thought that he looked sad. She wasn’t sure why since she didn’t really know him and didn’t have time to really look at him each day but she felt that he radiated sadness.

She started thinking about him and creating stories to explain his visits to the lake. One of the stories that she created was that his young wife, who had recently walked out on him, loved going to the lake and he went there to see if he could see her. Another story was that he had a very stressful job and his doctor had suggested that he take a few minutes at the start of each day to relax with the sounds of the waves. Or there was the sad tale that his child had drowned in the lake and he came by daily to mourn his loss.  Each time she started weaving her stories she shook her head and told herself to stop being silly.

Then one morning she tripped on her run and fell. She fell right by the bench. As she laid there for a moment trying to collect herself, she waited for him to acknowledge her. He didn’t. It took her a minute to get up and when she did, she found that her ankle really hurt.  She limped over to the bench. He moved down the bench but other than moving down, he didn’t acknowledge her. She sat there for a moment trying to gather her thoughts.  Her ankle hurt so much. She looked down and it was swollen to the point that she knew she had to take off her shoe. When she bent down to take off her shoe, he stood up and walked away.

Her kind thoughts about the sad man on the bench evaporated. Once again she had let her imagination meet reality and found that reality paled next to her imagination. She pulled out her cell phone and called for help.

I love to read. I love to share my thoughts on books and hope to hear what you think also. Looking to see what books I read beyond those I write about? Check out my Goodreads!
View all posts by Carol Early Cooney →
This entry was posted in Miscellaneous Thoughts and tagged bench, Weekly prompt, word prompt, Wordsmith Stuidio. Bookmark the permalink.