You would think that I would start running out of books, wouldn’t you.  But I’m not….

There are more books than the days before Christmas!

Illustrations by Howard B. Lewis 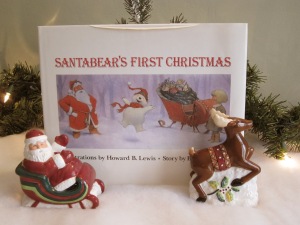 Last Friday, I wrote about Rudolph the Red-Nosed Reindeer and how it was a coloring book developed as a store giveaway. (Here is a link if you missed it.)

Santabear was not a giveaway but it was a store themed item. From 1985 – 2007, the Dayton Hudson Company had a Santabear each Christmas. The Santabears would be dressed differently (astronaut, drum major, forest ranger) each year. With the exception of the 1985, all the bear’s outfits indicated the year that they were sold. They became quite the collectible item.

In 1986, they also developed the Santabear book and video. They followed it with Santabear’s High Flying Adventure in 1987.

Santabear’s First Christmas is the story of the little polar bear that was separated from his family because his piece of ice cracked off and set him sailing away. (Another upbeat start for a Christmas book.) He finds himself in the forest and is befriended by a little girl and her grandfather. There is an emergency and the little bear, with the help of a moose and Santa, saves the day. Due to his selfless helping of others, he is named Santabear by Santa and Santa grants his special wish.

It is a very nice little story and the illustrations are a compliment to the writing. This book is also out of print but there are used copies available.