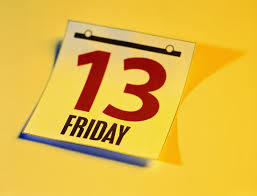 Do you suffer from paraskevidekatriaphobia? Then it is time to get under the covers because today is Friday, December 13. This date has been significant in my life to two reasons. The first is that it is my Grandmother’s birthday and the only reason that I know that is because it was also the date of my son’s first surgery. (Which it seems to me was 13 years ago.)  I remember both because my father told me it was a lucky day because his mother was born that day.

Let’s not beat around the bush, let’s get straight to the story of Rudolph. Where did that reindeer come from? The original was not a book but was actually a coloring book.

Montgomery Wards was a department and mail order store in Chicago. Every Christmas they would purchase coloring books to give to children. In, 1939, it was decided that it would be cheaper to produce the coloring book in-house. Robert May was given the task of developing the coloring book. He is the source of Rudolph the Red-Nosed Reindeer. The story was a huge hit.

In Robert May’s life, 1939 was significant for another reason. In July of 1939, his wife, Evelyn, died of cancer.  He was left with large medical bills from her treatment. He struggled with the bills for years. In January of 1947, he told Sewell Avery (then president of Montgomery Wards) about his medical expense debt. Mr. Avery then gave Robert May the copyright for Rudolph.

Mr. May continued to work as a copywriter until 1951 when he resigned and spent 7 years managing the Rudolph empire and then he went back to work for Montgomery Wards until his retirement in 1971.  Mr. May died in 1976.

And then there is the song. The song was written by Johnny Marks, who happened to be Mr. May’s brother in law. They tried to get Bing Crosby or Dinah Shore to sing it but they refused.  Gene Autry recoded the song and it is now the second most popular song of all time. (White Christmas is first. Gee, if Bing had recorded Rudolph, he could have the first and second most popular songs.)

I am not sure which I like better.  Is it the story of Rudolph or the story about Rudolph? Which is it for you?  Let me know.

I love to read. I love to share my thoughts on books and hope to hear what you think also. Looking to see what books I read beyond those I write about? Check out my Goodreads!
View all posts by Carol Early Cooney →
This entry was posted in Talking Books and tagged children's Christmas books, Christmas, Christmas books, coloring book, Gene Autry, Johnny Marks, Montgomery Wards, Robert May. Bookmark the permalink.