Children’s Books that have been Banned or Challenged

Children’s books seem to hold a place near and dear to censor’s hearts. Most books that people try to remove either from libraries or reading lists are because an adult has found the book either sexually explicit or they feel the book has offensive language. I think that sometimes people may be a bit reactionary regarding children’s books. I think that they try and shield their children from their perspective on a story and not a child’s perspective.

Two books for pre-readers that are frequently on the banned/challenged list are by Maurice Sendak. The first is In the Night Kitchen. The little boy in the book loses his clothes during his dream. There have been objections to his nakedness.  Mr. Sendak’s more famous book, Where the Wild Things Are, is also on the list for its portrayal a disobedient child and the monsters. Mr. Sendak won the Caldecott Medal in 1964 for Where the Wild Things Are and was on the Honor list in 1970 for In the Night Kitchen.

I don’t know about your child but I have heard that sometimes, especially little boys, are not as enchanted with reading. Some young readers need a story that they can truly relate to so that they will sit down to read it. Currently there are a series of books that are meant for children to relate to but have been challenged because someone thinks that the books condone mischief and the disrespect of authority. This series received the highest number of challenges during the past year. It is the Captain Underpants series by Dav Pilkey. 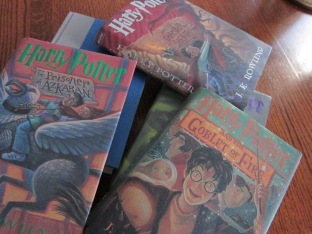 The top rated banned/challenged books for the period 2000-2009 were (ta da!) the Harry Potter books. You remember those books, the ones that EVERYONE was reading. The books that children could not wait for the next book in the series. The books that there would be parties at the book stores when a new book was published? Yes, those books are on the banned/challenged list. It seems that they were deemed to be too violent and that they promoted Satanism.

Madeline L’Engle, one of my favorite authors, even makes the list for her book A Wrinkle in Time. It seems that there are various religious groups that have found the book to have offensive language and feel it undermines their religious beliefs. The book won the Newbery Medal in 1963.

This is a sampling of the notable books on the list of banned/challenged books. Were any of them your favorite books?

I love to read. I love to share my thoughts on books and hope to hear what you think also. Looking to see what books I read beyond those I write about? Check out my Goodreads!
View all posts by Carol Early Cooney →
This entry was posted in Talking Books and tagged A Wrinkle in Time, Banned Book Week, Captain Underpants, Children's Banned/Challenged books, Dav Pilkey, Harry Potter, In the Night Kitchen, Madeline L'Engle, Maurice Sendak, Where the Wild Things Are. Bookmark the permalink.