Time to Hotfoot It Out of Town

(And the BlogHer August challenge moves relentlessly on. As I continue on the “hot” theme, today we move to “hotfoot”. You may be wondering about whether I have made a mistake and it should be “hot foot” and not “hotfoot”. Today’s interesting tidbit is that it can be either.  So a new fun fact along with a story.)

Sam felt that he had done all the damage he could do and it was probably time to hotfoot it out of town.

He had loved her at one time. That had been back at the beginning when it was all steamy looks and passionate kisses. Then he felt a shift. She didn’t seem to change but he felt a difference.

It was like all the times before. He had given too much and she had grown tired of him.  Why oh why did this keep happening? He had so much to give and she just didn’t recognize it.

It was especially clear when she left him alone one night. He saw her with another. She had taken the new one to bed with her. He would allow her this one mistake because of his love for her but he could not take this for long.

But she didn’t come back. She was with her new love all the time. She carried him around and proudly showed him off to one and all. He remembered when it had been like that for them. He yearned for her touch but she hardly knew he existed.

He kept hoping but he was dashed to find her with yet another. She had moved on again and he knew she would not be back. He was sad but after a time his sadness became anger. Then he saw his chance.

He saw the box in the hallway. It was the telltale sign that there was a clean out in process. So, late at night when everyone was asleep, he slipped down from the window sill. He knew where there was a marker hidden from view. With all of his energy, he moved the marker over to the wall and started moving it back and forth. It was exhausting but each stroke felt like payback for the loss of her love.

Finally he was finished. It was a total mess. There were black  scribbles on the yellow wall. He knew she would be in trouble for it. It was a bittersweet moment for him. While he felt exhilarated to pay her back, at the same time those feelings of love were not entirely extinguished.

He put the marker down and made a running leap into the box bound for the charity store. 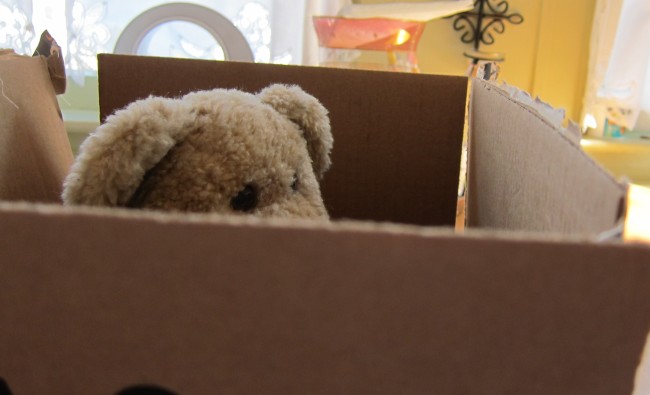 (The part of Sam in today’s piece was played by Ferdinand.  He is a good bear.)

I love to read. I love to share my thoughts on books and hope to hear what you think also. Looking to see what books I read beyond those I write about? Check out my Goodreads!
View all posts by Carol Early Cooney →
This entry was posted in Writing and Photo Prompt Responses and tagged BlogHer Challenge, Hotfoot. Bookmark the permalink.